An invaluable resource while making these Fate Accelerated Edition fantasy characters was Evil Hat’s awesome Fate Worlds of Adventure: Masters of Umdaar. It’s meant to do retro weird science-fantasy adventure, like John Carter of Mars, Flash Gordon, He-Man, and Thundercats, but can also do “classic fantasy” really well as it turns out.

Part of the reason I feel Masters of Umdaar works so well for classic fantasy is the spread of aspects characters get: a high concept, a motivation, a personal aspect, and a shared aspect. As I didn’t know what characters would be picked for the one-shot, I replaced the shared aspect with another personal aspect. (Though I suppose I could have made “generic” shared aspects, or shared aspects with a blank allowing players to write in another character’s name.) I also added a fifth aspect, as FAE characters usually have five aspects: a piece of gear.

The high concept for Masters of Umdaar summarizes the character’s bioform, class, and something important about them, often a descriptive word related to their lead approach. As I’m drawing inspiration for these characters from classic fantasy games like Dungeons & Dragons and Pathfinder, which are class systems, a high concept that incorporates class and race seems really appropriate. Seeing aspects like Audacious Human Battlemage, Cautious Dwarven Runepriest, and Nimble Halfling Thief tell the player exactly what type of character is sitting on the table in front of them. I did have to bust out the thesaurus for some of the characters, because I didn’t want the descriptive word in the high concept to just be a duplicate of the character’s lead approach.

So here’s the third fantasy character: a changeling rogue. This was the first character I made, and it was inspired by the first Patreon pack put out by Printable Heroes.

You can download the character as an A4-sized PDF or a letter-sized PDF. 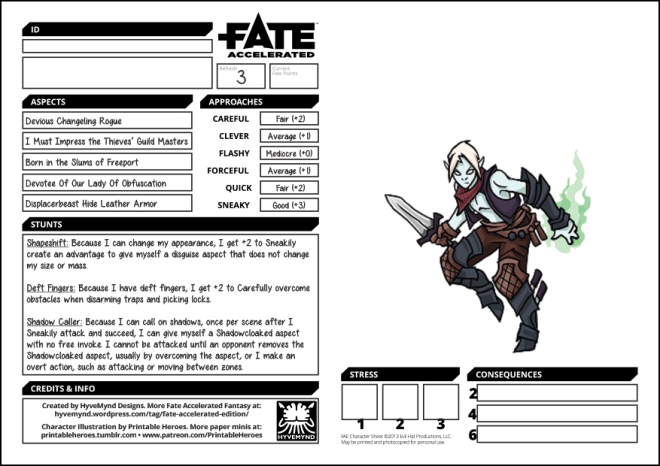 The character illustration is one of the free paper minis made by Printable Heroes. The free versions are backless, but if you back the Patreon at just $1 a month you get minis with backs. For $2 a month you get access to “reskins”, and for $3 a month you get multiple color options. That’s a fantastic deal.