I ran a poll on Twitter and Google Plus two weeks ago asking which monster people wanted to see for future Monday Monsters posts. The Purple Worm and Juvenile Blue Dragon tied for second place and as I have something special planned for the dragon, I decided to do the Purple Worm next. To be honest, I’d already statted up the massive creature before running the poll, but I made some changes to it over the weekend with stuff from the fantastic Fate Adversary Toolkit.

The Purple Worm has several notable features that I wanted to capture: its massive size, its tunneling ability, and its propensity to swallow opponents whole. I’m already using the Weight rules from War of Ashes: Fate of Agaptus, conveying its size was fairly easy. As this is Fate and everything can be treated as a character, even various parts of the same huge monster, I could have broken the worm into two smaller characters; a head and a tail. That would have allowed the two halves to operate independently, making separate attacks even, but I felt that would be too complicated. More NPCs on the board means more of a hassle for the GM, so I kept the worm as a single character.

The tunneling ability could have been handled a number of ways too. I like stunts that allow a character to create aspects at the beginning of a conflict as a way to set the scene. I feel these sorts of stunts are great for monsters that will most likely be encountered in their lair or in a place of the monster’s choosing. The worm could have had a stunt that created a Broken Ground, Unstable Terrain, or Miles of Tunnels aspect to represent it honeycombing the area with tunnels prior to the encounter. I feel that I’ve been overusing those sorts of stunts though, and so looked for something else. A stunt that granted a bonus to creating tunneling related aspects would have been appropriate too. But as the worm would most likely do that with the Forceful approach, which is Fantastic (+6), there would only be a very small chance of them failing. An “auto-succeed” dice roll like that seemed rather boring.

Ultimately I went with a stunt found in the Fate Adversary Toolkit and reflavored it. I imagine the worm burrowing so deep that they’re impossible to spot, attack, or affect in any way. Removing the character from the scene seemed the best way to represent that, as a Burrowed aspect could be overcome. Plus, if the characters can get out of the scene before the worm reemerges again, it’s a way for them to escape the monster. Moving to any zone and instantly attacking is pretty powerful, but the stunt costs two Fate points, (one to disappear and another to reappear) so it’s something I see happening only once or twice during an encounter.

Swallowing characters whole was the hardest ability to decide on. Again, there were multiple ways I could have done this. Both Dungeons & Dragons and Pathfinder versions of the worm give swallowed characters a chance to escape. Which is only fair, really. It’s no fun at all to have your character get one-shotted, even if it is by a giant worm. Giving swallowed characters an Engulfed aspet would have worked, and has the benefit of being simple. A stunt that granted a free attack against everyone with the Engulfed aspect at the end of the worm’s turn could represent the crushing and acid damage a character takes from being in the monster’s guts. I could also have made the inside of the worm a separate character, complete with aspects, approaches, and a separate stress track. But as I said with the tail, that means more for the GM to keep track of. Plus, I wanted to use some of the new stuff found in the Fate Adversary Toolkit.

One of the new things in that book are countdowns, a way to track elapsing time and increase tension. I think it works wonderfully here, as the longer a character stays in the worm’s esophagus, the farther down they get pushed until plop! They’re dropped into it’s stomach. To really reinforce that swallowed characters are in a different location than those outside the worm, I made the worm’s esophagus a separate zone, complete with its own aspects. (I read that indigestible items like metal and gems are often found in the guts of Purple Worms, and thought that would be fun to include. Plus, the character has to deal with the contracting muscles of the esophagus itself.) My gut (See what I did there?) said to make the countdown only three boxes, but I was feeling generous.

Looking at it now, a separate zone with an individual countdown for each swallowed character isn’t any simpler than breaking the worm into two, or even three, separate characters. But I’m pretty happy with how this came out. Make no mistake, this thing is a beast. It’s lead approach is three steps higher than the fantasy characters I’m making. Coupled with its weight of 8, it will almost always succeed with style on any of its forceful attacks. This thing is meant to be a serious challenge, and smart characters will probably run rather than try to fight it.

The Worm Guts zone is a separate zone representing the gullet of the massive worm. The only way for someone to move into this zone is by being swallowed by the beast, either as a result of the Belly of the Beast stunt or by willingly jumping into the creature’s mouth. This zone has Hunks of Unrefined Ore, Littered with Precious Gemstones, and Grinding Muscular Contractions aspects. When someone enters the Worm Guts zone, start the following countdown for that character:

DIGESTED!
Obstacle:
Opposition: Great (+4) Esophageal Muscles
Countdown: ▢ ▢ ▢ ▢
Trigger: An exchange elapses with someone in the Worm Guts zone.
Outcome: The character is dumped into the roiling pool of acid that is the worm’s stomach.

You can download the Purple Worm as a two-page A4-sized PDF or a letter-sized PDF. 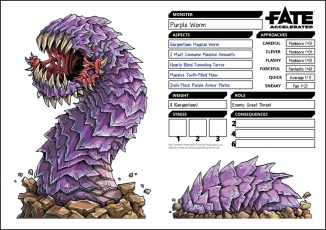 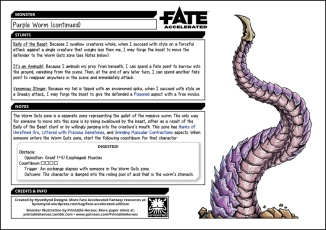 The monster illustration is the free paper mini made by Printable Heroes. The free versions are backless, but if you support the Patreon at just $1 a month you get minis with backs. For $2 a month you get access to “reskins”, and for $3 a month you get multiple color options. That’s a fantastic deal.