Rise from your grave!

I liked making fantasy monsters and heroes for the Fate Accelerated Edition RPG (and based on the fact people are still viewing the site) I guess other people liked them too. Unfortunately, it became really hard to find the free time to write up two to three new posts every week. Even short ones. Wrangling a (now) two-year old kid is exhausting, and by the time my job, childcare, and household duties are finished for the day, it’s often 10:30 p.m. Which is bedtime for me, since I never know what time I’m going to be woken up, or even if I’ll be allowed to sleep through the night. Toddlers. They’re cute, most of the time, but they wreak havoc on your schedule.

I was getting feedback and engagement on my blog posts though, which was fantastic. A big part of the reason I stepped away from podcasting a few years ago was due to a lack of listener engagement. It made me feel as if the hours I spent each week researching, recording, and then editing the Idle Red Hands RPG podcast were a waste of my time. Which wasn’t a great feeling. (The last regular IRH episode I was a host/editor on was May 2015, just in case you’re curious.) So it was really nice to see the number of visitors for this blog slowly climb as I settled on a regular posting schedule, to have people leave comments, and to interact with the FAE Fantasy twitter account. But I just couldn’t keep it up, and after a month of late or hastily written posts in May of 2018, I decided to stop.

But things have calmed down somewhat, and I’m going to try and start the blog up again. But as more than just FAE fantasy monsters and heroes. I do a lot of tinkering with a lot of other RPG systems, and as Google+ is sadly going to disappear soon, I’m going to start posting those ideas here.

One of those ideas is a card-based, Dungeons & Dragons inspired fantasy hack of the Danger Patrol Pocket Edition RPG by John Harper. 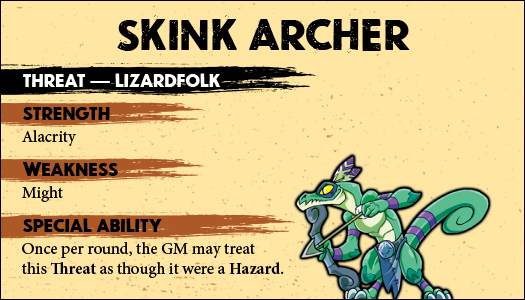 That’s a sample of the card design I’m working on. The illustration comes from the Reptile Riders: Cavalry Pack by Trash Mob Minis, who makes awesome paper miniatures. I’ll post more about it soon, either this Friday or next Monday.